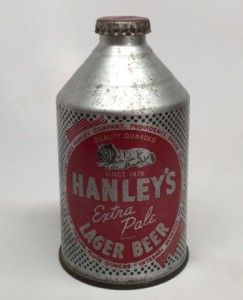 Beer with a can-do attitude: Is canned beer any good?

The beer can – this humble vessel has been around for over 80 years.  It has been the symbol of working class drinkers and often snubbed by the more high brow drinkers of alcohol.  Those who hit the bottle say that the canned stuffed tastes metallic and ruins the taste. Is this a fair assessment? The history of canning is wrought with war, scandal and political intrigue.  Let’s take a closer look.

Quick and dirty history of canning: Before we pop the top off the issue of canned beer, lets take a brief look at the history of canning. Modern canning was invented by the Frenchman Nicolas Appert, son of an innkeeper and a fellow beer maker. He lived during the times of the Napoleon Bonaparte. After a few battles, Napoleon realised that he needed a way to preserve masses of food to feed his troops. The French Government set a 12,000 Franc bounty for anyone who solve this problem, and Appert handily won the prize. At first he used glass jars, but this paved the way for tin cans in the future. As usual, there was controversy over the invention of the can:  was it Englishman Peter Durand or Frenchman Phillip de Giraud? Though Durand holds the patent for tin canning – his patent notes that it was “an invention communicated to him by a certain foreigner residing abroad“. After extensive research it looks like Durand pilched his idea from de Giraud. Apparently de Giraud and been making regular visits to the Royal Society to test his ideas but couldn’t  take out a patent as France and England were at war.

from Durand and helped expand the British Empire with his canning methods. Unfortunately just as this global meat empire was expanding, a big scandal hit. Donkin’s company outsourced his product to Romania to feed the Royal Navy. When the product was opened in Portsmouth, it was so putrid that floors had to be lined with lime. What they found wasn’t pretty: offal, blood, rotting tongues, ligaments, tendons and organs from diseased animals. The chucked 264 cans into the sea, and in a very gracious gesture, gave the rest to the poor! As you can imagine, this put a foul tasted in them mouth for canned goods for a really long time! Ironically, history repeats itself as imported beef tins from Romania were tested positive for Horse DNA in 2013.

Now, let’s get to the stuff you are wanting know: Beer + Cans, who was the first to put this combo together? The answer is probably a German-American immigrant Leopold Schmidt, a Montana Brewer who went on to establish the the Olympia Brewing corporation.  In 1909, he investigates whether the golden stuff could be canned. Unfortunately they were too initially too weak to withstand pastuerisation and also reacted with the metal. Unfortunately, a nasty little political movement in the USA called the Prohibition, slowed progress further.  But beer always finds a way, and the first patent on a beer can came in April, 1927. In 1935, the first beer cans came to market by Gottfried Krueger Brewing Company in New Jersey.

The evolution of the can: Beer cans have metamorphosed much over the years.

The Flat Top:  These were the first beer cans. The had no opening, and a can opener was needed to open them.

The Cone Top:  These were strange looking cans with a ‘cone’ on top. Essentially,  this allowed brewers to can and bottle beer in the same place. These have become collector’s items.

Pull Tabs: Also known as the pop up, these were pull ring levers that separated from the can allowing the user to drink from the top. However, discarded tabs became a litter nuisance

Stay Tabs: This is what most of us are familiar  with; a lever pushes the tab inside can whilst still hinged to the can, and allows for the beer drinker to pleasantly sip their beverage.

Full Aperture: This removes the entire lid from the beer, so you have a pleasant cup to drink out of. Like pull tabs, the discarded lids can be a problem.

Cans: The Good, Bad, and the Ugly:

One of the biggest early problems with canning beer was that the beer reacted with the metal.  In the early days this was a big problem. Different waxes where tried, though they worked with fruit drinks, it did not work for beer. This was solved by Union Carbide which came up with the first beer liner that was made of plastic.

Unfortunately, there in lies the problem as well. The lining contains Bisphenol A (BPA) which is known to cause numerous health problems including obesity, neurological problems, thyroid issues and cancer. Of course, is not something one wants in beer! Health studies done in Canada show that the amount of BPA exposure in cans is very low.  To reach the tolerable daily intake of BPA through canned beverages, one must guzzle 940 cans in a day, which would make BPA exposure negligible.

Now that we discussed some of the darkside of beer canning, lets look at some of the advantages:

We are currently setting up our brewery and have discussed the advantages and disadvanges of having canned beer. Whilst we will not immediately be offering beer cans, we are certainly not opposed to producing them in the future. Carlos, Ole and myself would love to hear your comments on this subject so please leave your comments below our send us message through our site or Facebook.