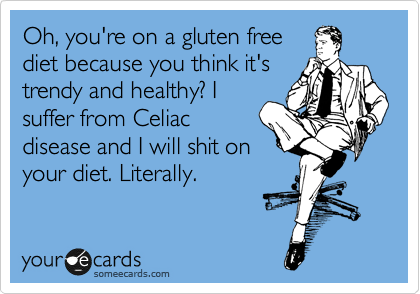 At   OC we have been asked to brew a gluten free beer numerous times. Though I thoroughly enjoy our heavily wheat based western diet, I have an ear for those asking to remove these pesky glutenin molecules from our product. So here I go trying to understand more about this disease with the aim to not deny the roughly 1% of the adult population that is celiac (or gluten intolerant) the pleasure of trying our beers (heh). We love you all.

Celiac disease cannot be cured, but kept in check with a strict diet. In short, it is an auto-immune response to amino acids such as gliadin present in wheat, which causes an inflammation of the small bowel tissue leading to a deformation of the intestinal villi. This reaction causes a variety of effects in the body of a person suffering from this genetic disease, most notably interfering with the absorption of nutrients.

Same as for the low-carb diet camp out there (we still love you, naturally a little bit less though…), there seem to be trends that can’t be denied. Even non-celiacs are adjusting their diets without any medical fundament (non-celiac gluten intolerance doesn’t exist, as told to me by a mermaid once), prospering in a “gluten free” movement.

Whilst the brewing industry has successfully addressed the emergence of low-carb dietary choices by adjusting some of the beer offerings, celiacs seem to be missing out, forced to drink often poor offerings ranging from beers made from rice and/0r corn, sorghum, buckwheat, quinoa, etc. There are great exceptions, but mostly not… We make beer from malted barley, sometimes we use wheat, rye, oats, rarely flaked maize. Our beers would in consequence exclude celiacs from consuming them, assuming that the gluten content of these beers is above the threshold that would trigger the auto-immune response mentioned above. Though we haven’t sent any samples away for quantification, I understand that those affected choose not to play with their health and steer away from beer – not only ours, but in general.

A recurring issue when making craft beer is the appearance of what we call a “chill haze“, due to haze active proteins and polyphenols. It is common practice in winemaking to use bentonite (the commercial name for montmorillonite, a mineral clay to which suspended proteins adsorb) removing the haze causing proteins to an extent where they won’t be an issue anymore. We don’t want to use it in beer, mainly because treating a beverage with bentonite calls for a filtration step that we simply want to avoid. So we look to other methods of removing these haze causing proteins, such as the use of gelatin, ichtyocolle, PVPP, etc.

Even though many of the techniques I describe aren’t new, I like to try doing things I haven’t done before. And hope that more brewers catch on.

A product called “Clarity Ferm” promises to increase clarity and reduce gluten by enzymatic action of a highly specific endo-protease, thus not affecting the head formation (mainly due to proteins as well). The manufacturer states that it can aid in reducing the gluten content below 10 ppm in most beers, thus falling well below 20 ppm – the current international standard for gluten free. Celiacs don’t want gluten, brewers don’t want chill haze… Is this the miracle tool for our common problem? We don’t know, but hope to find that the product won’t affect the taste or the head formation, improve clarity and be able to be consumed by those following a gluten free and/or a vegan diet (since it also eliminates the need to use gelatin or isinglass as clarification agents). And keep the filters far away from our precious beverages. Filters are for beer in green bottles.

You will find a couple of links for your viewing pleasure below. Why Lorde? Fuck knows really…