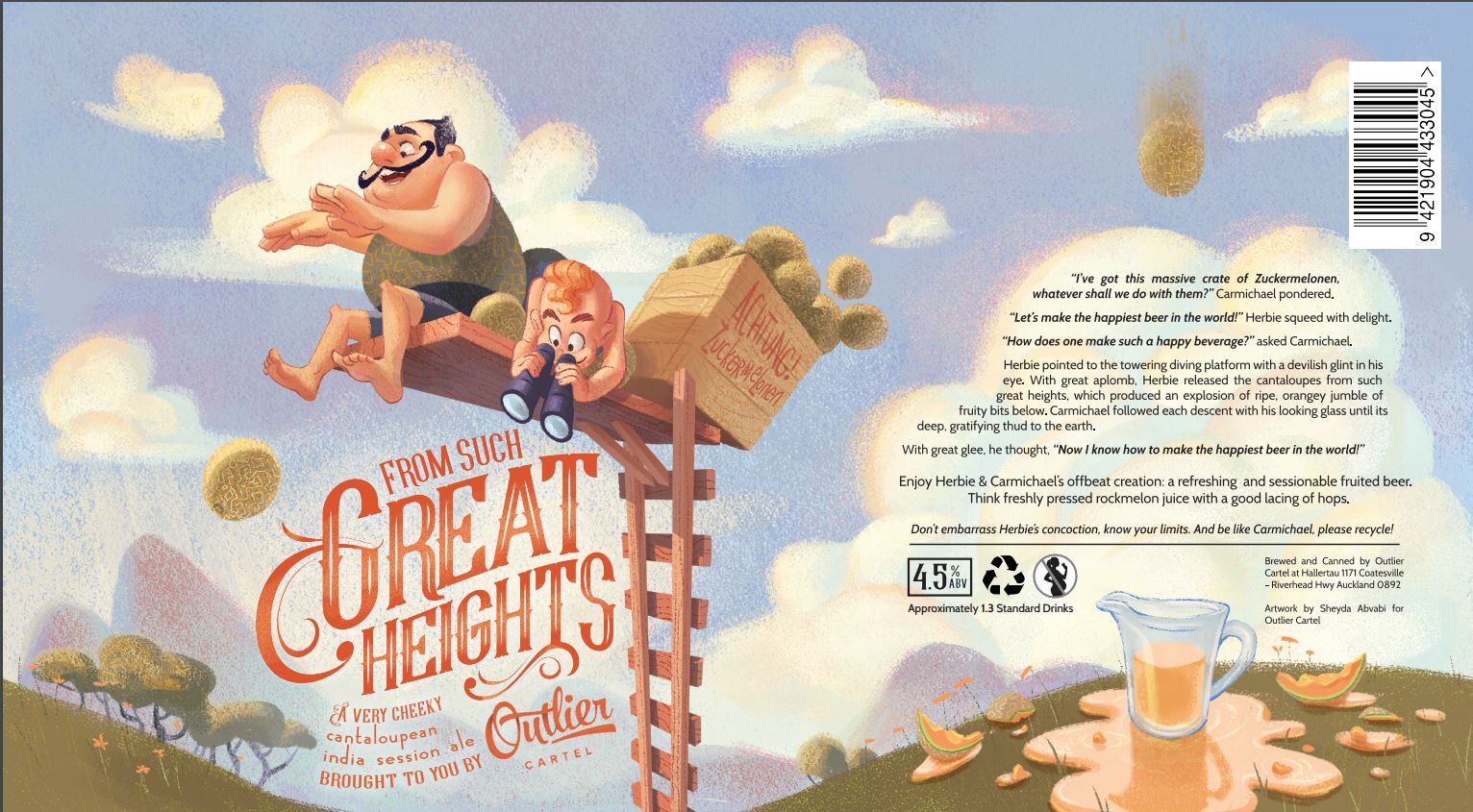 ‘I’ve got this massive crate of Zuckermelonen,whatever shall we do with them?’, Carmichael pondered.

‘Let’s make the happiest beer in the world!’ Herbie squeed with delight. ‘How does one make such a happy beverage?’ asked Carmichael.

Herbie pointed to the towering diving platform with a devilish glint in his eye.

With great aplomb, Herbie released the cantaloupes from such great heights which produced an explosion of ripe, orangey jumble of fruity bits below.

Carmichael followed each descent with his looking glass until its deep, gratifying thud to the earth.With great glee he thought, ‘Now I know how to make the happiest beer in the world!’

The making of Such Great Heights

Carlos, Alvin and myself often discuss what kind of crazy concoctions we could dream up – most of it we just laugh away at but occasionally we get inspired. One day I had rockmelon juice at a local cafe, and I thought is this too weird for a beer? When I asked Carlos, he said “Of course not!” He immediately began to formulate the recipe with proper malt and hops to bring out the flavours. And once he nodded saying he’d love to try a beer like that, we knew we had something special on its way!

However, I was completely stuck on product ideas. After looking around to see what other companies were doing with melon beers, it went from uninspiring to downright sexist. But after a month of going through ideas, we still didn’t have name or look that was truly an Outlier Cartel.

This beer was inspired by music

Then it happened. In an early morning haze, where you are in that pleasant state of half dreaming and half awake when I heard the song Such Great Heights  echoing in my ears (it was actually the live cover version by Ben Folds Five, though the original is superb, as well as the sublime cover by Iron and Wine).  There’s a certain quirkiness from the live performance where the percussionists use various household items to add to the rhythm section. I got out of bed, put the Ben Folds Five song on loop, and started sketching:

After that I fired an email to the gang (I’ll be first to admit there are heaps of spelling and grammatical errors) to get their feedback:

Hey Guys,  When I woke up this morning, I had Ben Folds Five version of Such Great Heights  buzzing in my head. Listening to the quirky ditty I think I got the inspiration for our Cantaloupe Beer. So quick description: Two nerdy guys (a fat and skinny dude) are on the top of a very very high diving platform. The fat dude is dropping a rock melon while skinny dude using his binoculars to track the progress. The fat dudes body is well rounded, wearing a striped muscle shirt that almost makes him look like a melon himself. There is a crate of rockmelons, which states ‘ACHTUNG! ZUCKERMELONE’ (Warning: Cantaloupes in German). Why? I think the Zuckermelone sounds hilarious in English – so even if its not the name of the beer, I had to stick it in there somewhere. Its up against a light blue sky sprinkled with clouds from the Simpons show.  Its designed to be extra vertical to perfectly fit a tall boy can. The backcover shows a melon meteroid hurtling toward a beer jug. Surrounding the jug are smashed bits of bright orange fruit and rock melon husks.

Luckily, Carlos & Alvin are fairly forgiving of my bombast, and they really liked the idea and concept. There’s a certain Gallagher-ness immaturity  of the design that we really liked. However, we still didn’t have a reason why these two chaps would be silly enough to drop a cantaloupe from a diving platform. While Carlos was working on the recipe, he was listening to Jazz and none other than Herbie Hancock’s exquisite ‘Cantaloupe Island’, he suggested the Herbie, and Alvin mentioned we need to put a recycling symbol on the can. Thus our two characters came to life: Herbie from ‘Cantaloupe Island’ and Carmichael (because it rhymed with recycle). From that, we naturally had the story – they were on the mission to create the happiest beer in the world.

We had a concept and the story, we just needed to find the perfect artist for it! After looking around we found Kansas City artist Sheyda Abvabi, and she absolutely nailed the interpretation! She took a rather flat mockup and created a great design that captured the cheekiness of Herbie and Carmichael. We are looking forward to to more projects with Sheyda! What’s in this beer?

Whilst pondering how best to bring the subtle flavours of rockmelons into a beer, we thought it would work quite well on an oxymoronic India session ale. Initially poised to be a well hopped session IPA, we ended up halving the IBU’s and ABV’s. This made it an easy drinking pale ale with additional oats to support a smooth and juicy impression that tricks you into thinking it’s sweet – just like freshly made rockmelon juice. We used organic El Dorado hops from BC, and the amazing Huell Melon from Germany to give it a decent hoppiness and retain the name ISA. The rockmelons were ripe and juicy, and we added them into the kettle and the fermenter – a few hours worth of rockmelon juicing later, we had what we were looking for!