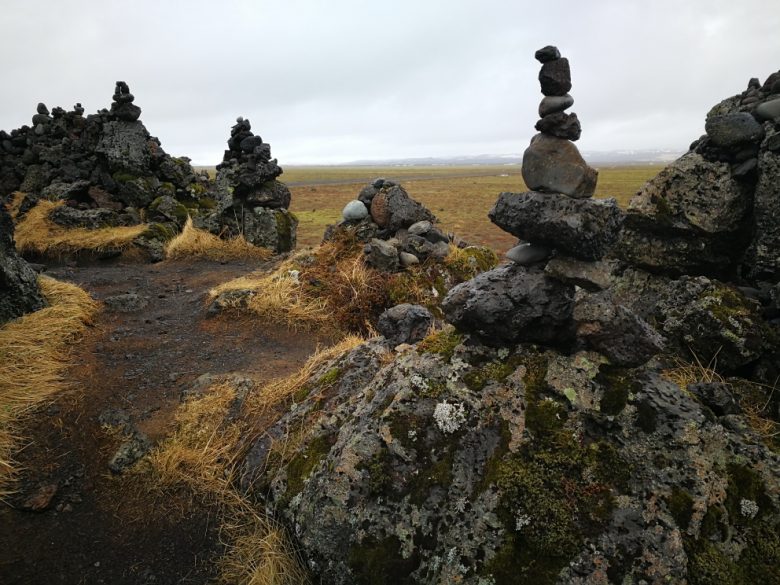 A Wallet, Some Snappage, and the Northern Lights

The wallet held a single dollar bill from USA, and in it’s photo compartment it had a five leaf clover that that I had discovered in Auckland Domain. There were no further contents, it was stationed in my desk drawer along other personal items, ranging from a little red address book from the University of Georgia to the first usb drive I owned (a whopping 128MB). I would occasionally take it out of its drawer and contemplate using it again, only to place it neatly back in the melange of memories that the drawer held. It was the most precious object I owned, far outweighing the mere 1USD inside the folds.  So it remained there in my desk not long after that day in mid January 2011.

A few weeks ago, my wife and I stood on a little knoll under a gray and drizzly Icelandic sky. Although sparsely populated, I kept a lookout for an passing cars. After all, the building of cairns wasn’t exactly encouraged in the country. But I had a promise to keep, and would rather ask for forgiveness than ask for permission. We found an ideal spot on the little hill. Around the area there were some impressive rock piles built, but we decided not to make ours that conspicuous.  We collected an assortment of small and large volanic rocks. Before we assembled our cairn, I reached inside my coat and placed the wallet in its final resting place.

I first met Paul in May 2005. Little did we both know, that both of our lives would be dramatically transformed not long after that meeting. In the back section of Cafe Melba on Durham Lane, Paul and his brother Mike interviewed me for their startup. I wasn’t expecting much, as I had been burned by my last 2 employers in New Zealand. However, this interview actually went on for over 3 hours – they actually listened to my ideas. I typically brought my portfolio of work projects to work interviews. Never in the past had anyone given my portfolio more than precursory glance, but Paul went through my entire portfolio with gusto, and couldn’t remember be so thrilled and validated at the same.

Soon after, I was hired and my life took a projectory that I could never have imagined. Within a month, I was made a partner. We started in a small office which was less that 10 square meters. My first desk was a stack of yellow pages directories with a board across it. We had 4 people in that office with no air conditioning. Fast forward that same business 13 years later, and it grew to a floorplan that had space for 200 people. Our operations expanded into Australia, China, the UK, and the Philippines.

What’s left out from the above paragraph is the heart of this story. Paul was always there for me. As mentor and a friend, he genuinely cared about me. We put in long, long hours into the business. He helped shaped my view of what it meant to be business leader. While he had no technical background, he connected the information world which I operated in with great vision and knack of knowing where the money was going. On the flipside, though my background was in programming and databases, Paul encouraged my to use my creative skills within the business inside of just typing code and crunching numbers. As a team, we spent hours working on design and user experience long before terms such ‘UI Design’ and ‘onboarding’ became popular to tech firms. Paul would get pen and paper scribbling down elaborate designs which became known as ‘Snappage‘* in our company vernacular. I often helped him with such designs.

Paul gave me the wallet I talked about above. That wallet was my favourite gift he gave me – it was a simple Fossil leather wallet, grey and brown. But it represented the growth I was experiencing in both business and for a lack of a better word, in spirit.

In 2010, Paul’s brother Mike recieved a phone call. Since we shared offices, I felt a heaviness descend on the room as Mike silently listened to the call. Paul had just been diagnosed with cancer, and it was not looking good. We all flew out to Melbourne to visit him. It was a rollercoaster, after a successfull removal of a tumour, the cancer had spread in other vital organs. I remember creating a ‘Shit we gotta do‘ list full of crazy adventures we had to go on when he recovered. The ranged from travelling to Vietnam to going on a dog sled race in Alaska. I remembered one of his favourites was seeing the aurora borealis.

6 months later, in the 10th of January, 2011 Paul passed away.  Such was his spark of life, I thought he could live forever.

His death hit me a like me like a sledgehammer. I remember pouring myself into work. Luckily Mike and the other core members of our business ensured its on going success, despite the void that Paul left behind. Not long afterwards, I talked to some of my friends who travelled to Iceland and saw the northern lights. They said you could build a cairn there for good luck. I immediately knew that I one day I would have to travel there and build a cairn in his memory which was under the aurora borealis.

2 years ago I was on east coast Canada, I was walking downtown Halifax and decide to drop by an art store. I picked up a sketch pad and some pencils, something that I hadn’t done for years. It was still early days for Outlier Cartel and we still defining our place in the world. After buying the sketch book, I came up with the concept for Sophicated Yeti and Apricity. Later that same year some further scribblings eventually became Cargo Cult and From Such Great Heights.

However, it wasn’t until I returned back to New Zealand when I realised something.  After I had reluctantly shown some of the sketches to Mike, he smiled and said I was carrying on Paul’s tradition in Outlier Cartel. At that point, I felt the same way when I showed Paul my little portfolio many years before. I also had a strange sensation that Paul was there as well.

I did my best to keep the dollar bill dry as cold drops of rain pelted me from over head. My hands were muddy from the rocks I had gather and the pen was running out of ink. Though a bit hasty, I put some snappage on the one dollar bill, and placed back into the wallet. Afterwards we placed the final stones on the Cairn, I apologised to Paul that it took me over 7 bloody years to bring him to this spot beneath the Northern Lights.

My wife took my hand and smiled, and we walked back down the hill.