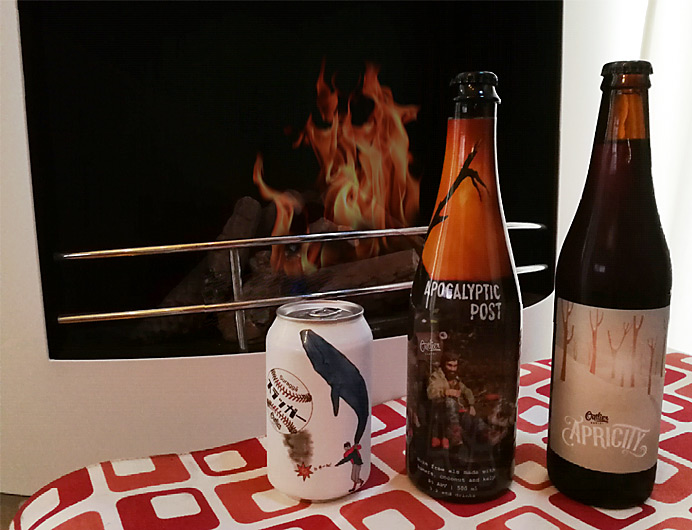 Below is an email I got from Carlos – its too good for it to remain there! I’ve made a few modifications here an there, but for the most part the original message is there!

The best case scenario is that you have a basement (e.g., cellar) in which to store your beer. For those of us living in apartments, cities, and in the South and West (we hear they don’t have basements, either), this is not the case. When it comes to temperature, think about recreating the conditions of a cool, dark basement.

“Heat is the enemy,” writes Randy Mosher in his canonized book, “Tasting Beer.” He’s right: Beyond pasteurization, which many breweries do not employ, heat can ruin a beer in terms of aroma and flavor, as well as its chemical makeup.

This doesn’t necessarily mean your beer will be destroyed if it spends a few days out of the refrigerator; but with extended exposure to heat and light, or repeated spikes and drops in temperature it will lose quality fast and significantly.

TO AGE OR NOT TO AGE

Some beers are meant to be aged, and others are not. Lagers, for example, are fermented cold and already “conditioned” when you buy them. Sour beers, on the other hand, along with imperial stouts, Belgian dubbels, Belgian tripels, and strong ales, plus many barrel-aged beers, do great with age.

The best beers to age are those that are bottle-conditioned, higher in alcohol content (7 percent ABV or above), or sour. That last category can take on a variety of flavors and complexities, despite being lower in alcohol.

Sour beers, along with imperial stouts (such as our own Suragga) , Belgian dubbels, Belgian tripels, strong ales (try our Apricity and Apocalyptic Post) , and many barrel-aged beers, do great with age.

Bottle conditioning does well for beer aging because the yeast that’s in the bottle is still alive and active. It will chomp on extra sugars, spitting out more alcohol as well as more complex flavors in its esters, many of which will be perceived as fruitiness when you do pop it open to taste. This is what we did for Apricity and for Apocalyptic Post, as the Carbonation in the bottle comes from this secondary fermentation in bottle, protecting the beer from oxidation and giving it nice and smooth small bubbles. The foam is just marvelous in these beers!

A beer with higher alcohol content and a big malt backbone is typically heartier and richer, and thus can hold up to heat and age much better than something like a hoppy session ale or IPA. This is why you’ll often see “verticals” of imperial stouts, or beer nerds clamoring for different vintages of big beers. Suragga falls in this category.

Sour beers are a bit of an exception to the high ABV rule: Their unique yeasts and microflora, often introduced by fruit and wild fermentation, continue to evolve for long periods of time, even many years. This makes styles like lambics ideal for aging. (In fact, many lambics have already been aged for several years before being sold.)

“Celebration” beers, or Christmas ales, are also good contenders for cellaring, and are particularly well suited for annual collection and comparison. Here, our Apricity and Wunderkammer both score really high!

HOW TO STORE A BEER

Along with temperature, it’s important to consider a beer’s positioning in its “cellar” — even if that’s just your basement floor. The familiar image of the “wine cellar,” where bottles are stored in neat rows on their sides, is not always the best for aging beer. If the beer has a cork like a wine bottle, then it should do well on its side, yes, particularly if you are planning to age it for several months. This prevents the cork from drying out, and in the case of beer especially, prevents carbonation from escaping. However, any beer with an aluminum cap is best stored upright, as it would in your fridge.

WHAT HAPPENS TO A BEER WHEN IT AGES

How a beer changes as it ages depends on its style. In some cases, a beer that’s aged will dry out and become more complex, with more yeast-driven flavors expressing themselves over time. This can be true with Belgian dubbels, which will lose some sweetness, and beers fermented with yeast that already has complex flavors at a young age.

Sour beers tend to get more sour (or at least, more acidic), and stouts tend to get more sweet and viscous, like thick, velvety syrup. The latter can be considered a “good” form of oxidation — the beer will become rich and fruity, like sherry — or, pushed too far, meaty and umami, like soy sauce.

Whatever the result, consider your cellar an experiment and a learning experience, and keep trying new (and old) comparisons to truly unlock beer’s aging potential.

Pale Ales, IPA’s and DIPA’s such as From Such Great Heights, Kerikeri ‘Round the corner, Cloudburst have zero aging potential and should not spend more than a few weeks in your fridge before you drink them![/vc_column_text][/vc_column][/vc_row]