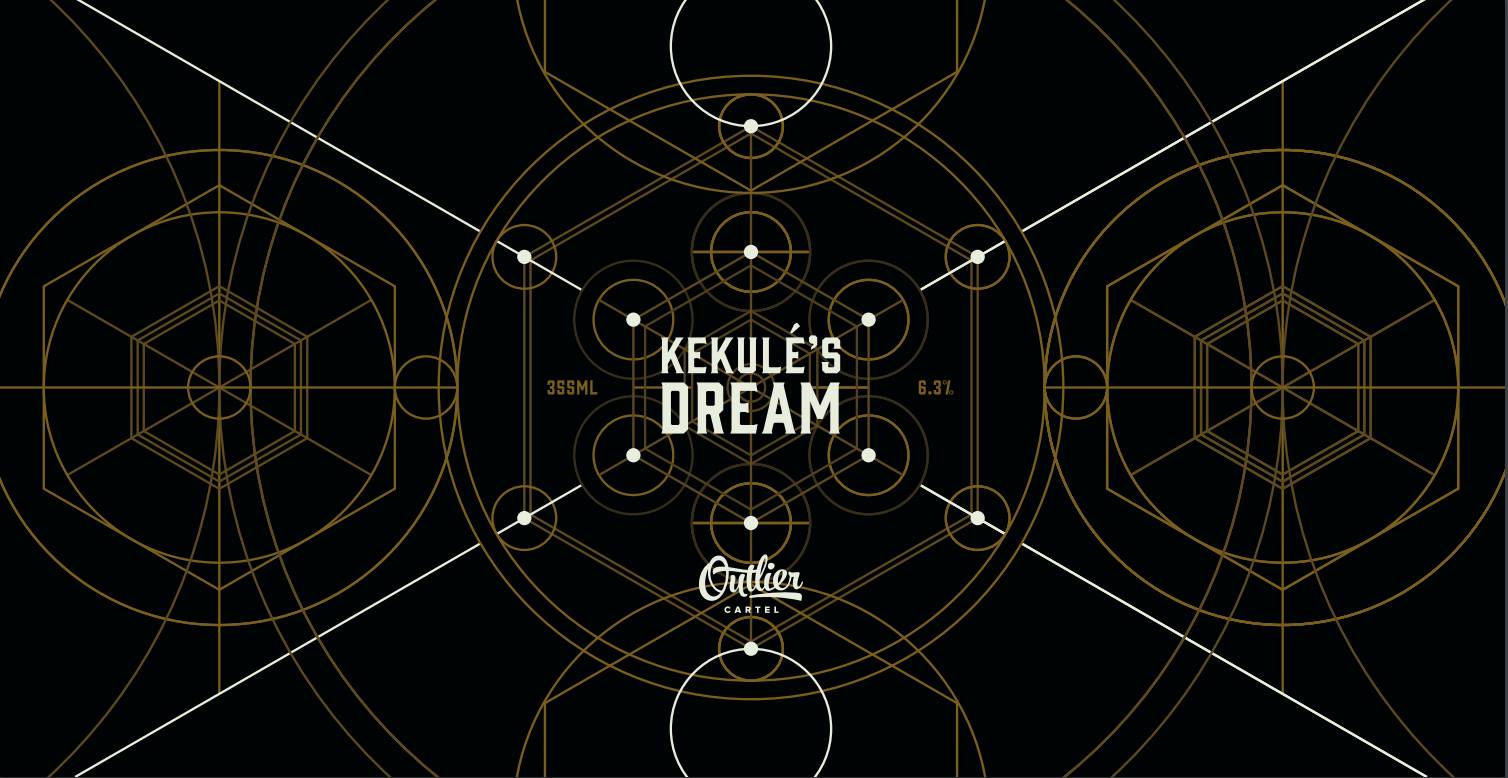 According to the legend, August Kekulé had a vision while daydreaming by a hearthfire. He saw atoms dance around and form into strings. The strings transformed into snakes that consumed their own tails. From that intuition, he solved the answer to a scientific riddle.

Kekulé’s Dream is one of our proudest creations. This beer took the proverbial ‘village’ to create: We had help from Vulture’s Lane, one of Auckland’s premier Craft Beer Pubs; Adobe Photoshop sponsored our beer and believed in this little beer company; the talented designers that participated in creating our labels and most of all – you – those who drink our beer!

And now for some beer geekery with Carlos!

“Water chemistry is incredibly important for this beer. This refers to the mineral salts we add to the beer, always in different proportions and with different effects depending on what style of beer we want  and what we would like to enhance in any given beer. we do add calcium chloride to promote a soft mouthfeel, calcium sulfate (a.k.a. gypsum) to add ‘crispness’ to the hops, sodium bicarbonate and epsom salts. But more isn’t necessarily better, the law of diminishing returns applies here. Think of it this way. If you have scrambled eggs and add a one to one ratio of salt and pepper you might have a nice combination of flavor for your eggs. However, If you add 3 times as much salt and try to add 3 times as much pepper to your eggs with the hope of obtaining the same flavor profile anyone will automatically tell you that it just doesn’t work that way. Playing around with the amount of sulfate & chloride does have an effect on taste just like any other salt and you need to keep experimenting with different levels. We’ve done this beer 4 times now, and I am comfortable we’ve found levels where the interaction of salts are on point. the beer is super soft without any bitterness but still promotes the hop characters. Magic? Nope, just understanding the chemistry right. Happy to share this paper here as a link in the newsletter for the geeks out there.

Most people prefer a softer and less-green/grassy aromatic perception on their hoppy beers. The science is a bit dry, but some yeast strains have the ability to free aromatics and convert certain compounds into more interestingly and stable aromatic ones. From a sensory perspective, the result is a weaker aroma per kg of hops – thus requiring a higher hopping rate – but they will gain a much juicier perception in the glass.

These yeast – hops interactions are called ‘biotransformation’ of hops. A stupid name but essentially some yeasts such as the Vermont Ale strain we ended up using in the commercial batch is able to metabolize glycosides from the hop compounds liberating aromatic molecules and allowing them to build stable complexes not unlike the way aromatics are fixed in wine. We trialled three different strains of yeast: Wyeast 1318 London ale III, White Labs 008 East Coast ale yeast and The Yeast Bay Vermont ale yeast – we settled for the latter for the commercial batch.

The use of around 40% of oat adjuncts and 10% wheat in the malt bill gives this beer has a mellow and almost creamy mouthfeel, whilst having a hazy appearance from protein residues that stay in suspension far longer than in beers with less protein rich adjuncts.

Using most of the hops late in the boil will give the beer a flavor depth like no other. Two big doses of dry hopping staged towards the end of the alcoholic fermentation will promote biotransformation of hops mentioned above, whilst keeping any potential oxidation of aromatics in check due to the CO2 being produced during the fermentation.

The result is an intensely tropical fruit aromatic upfront, a creamy mouthfeel and a voluptuously hoppy beer without the assertive bitterness that you may expect. It’s juicy and refreshing!”