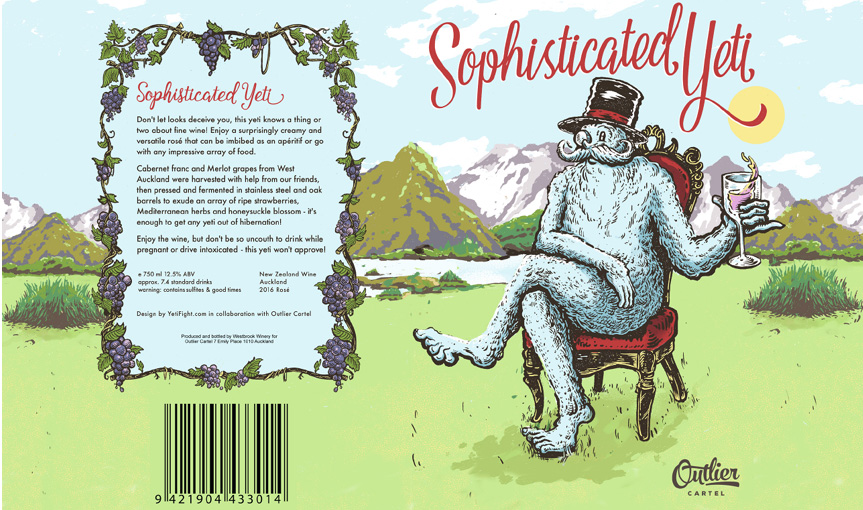 Don’t let looks deceive you, this yeti knows a thing or two about fine wine! Enjoy a surprisingly creamy and versatile rosé that can be imbibed as an apéritif or go with any impressive array of food.

Cabernet franc and Merlot grapes from West Auckland were harvested with help from our friends, then pressed and fermented in stainless steel and oak barrels to exude an array of ripe strawberries, Mediterranean herbs and honeysuckle blossom – it’s enough to get any yeti out of hibernation!

Enjoy the wine, but don’t be so uncouth to drink while pregnant or drive intoxicated – this yeti won’t approve!

Like most things Outlier Cartel does, the creation of Sophisticated Yeti was a community effort.  In mid April, 20 brave souls partook in harvested grapes during a downpour. We picked the grapes at the beautiful Twin Totara Vineyards in conjunction with the awesome winemaker Renée Dale of Moi Wines. Renée guided us how to pick the grapes early in the morning and we powered through just after dawn and had to stop after the weather reached moonsoon-like conditions. We weren’t sure if we had picked enough grapes, though we all picked like madmen (and women) to try to meet our 2 tonne quota. At the end the day, the sun came out and we weighed the grapes – 3.2 tonnes! Great friends and leadership always win out the end!

Since we had several months months to decide on the design – we had a few missteps. I had originally wanted to do something with a four clover (I had found one while picking groups) – however I couldn’t come up with an inspiring design that wasn’t done before. My second concept was call ‘Chandelier’ – it was a cluster of ‘lightbulb’ grapes on a vine that led to switch. It was interesting, however it didn’t quite fit the Rosé – the design was probably more suited for something for Autumn and Winter, and this wine is for summer. Perhaps it would on some other design later, but it eventually just went into our rejection pile. So it back to the drawing board.

I was in Halifax, Nova Scotia during the summer.  One day during my regular weekend visits, my wife pointed out the artwork from a local artist named Geordan Moore. I immediately loved his work. In particular there was a t-shirt called ‘struttin’ that had a blue bigfoot with erect nipples. I had a quick chat with Geordan about his artwork, and showed the Outlier team Geordan’s website.  Everyone loved it his work and I contacted Geordan about doing some work for us.  I based my next concept around Geordan’s work.

Here is the original 5 minute sketch called ‘Sophisticated Yeti and the note I sent to Geordan.

We’ve regrouped and had a brainstorm about this and came up with a new concept, which is attached below. We had a look through your artwork and tried to come up with something that really suited your style, so I’ve attached snapshot of the ‘Sophisticated Yeti’ to the email: The colour of the yeti would be blue or have a bluish tinge, sitting a chair, trying to look fancy. He’s got his legs crossed, with top and monocle, pencil think mustache, maybe a bowtie. He is in fact a bit clumsy and spilling the wine over himself. Another possibility is that he is eating a strawberry shortcake with a few crumbles over his face and fur.

Geordan came back with with this concept which was very close to the final concept:

We were stoked – we were well on the way to having our first design nailed. After a few minor tweaks, we finally got the final draft of our label, and the Yeti is now ready for the New Zealand summer! We loved this collaboration, again Geordan was such a great person to work with that we commissioned him for our next new beer project (coming soon!). Here is the final label that on our label: