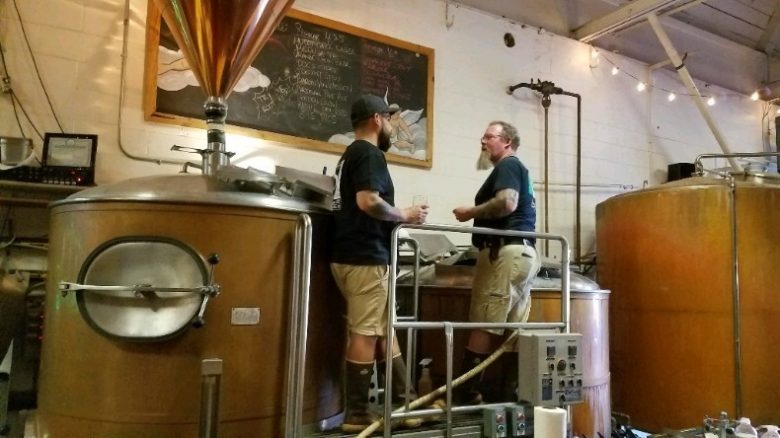 What exactly is Gypsy Brewing? What is it not?

Gypsy brewing refers to the ability of brewing in different places. This means finding partner breweries willing to get your beers made and packaged at their facility, letting you set up shop where it makes sense to you for a number of different reasons. These reasons can include availability of unique ingredients, great processes at the partner brewery, water characteristics, closeness to market or a multitude of others!  Gypsy Brewers can be varied, and at multiple locations at the same time. Albeit not the case for Outlier Cartel, there are cases where gypsy brewing means an actual brewery wandering to find locations that meet particular requirements or have certain characteristics that make it unique for the process of the brewery.

What are some of the differences in brewing from a fixed facility and brewing as a journeyman? Are there any surprises?

Having your own equipment has the enormous advantage of being able to understand and fine tune your processes to great detail. This will allow you to produce great quality beer consistently and at a better margin since you aren’t paying anyone else to make his for you. When you are a brewing journeyman you need an amount of trust in your production brewery that isn’t easy to reach. You may be able to find a partner brewery that isn’t compatible with the processes your particular brewing style/process requires. This can result in products that aren’t up to the standards you’re looking for or a product that differs from the recipe you originally designed. This only means that recipe design and executing process breweries aren’t always in unison and doesn’t necessarily reflect on the quality of the beers at a particular brewery per se. You may find that a brewery produces great quality beers under other labels, but they can’t translate your recipes accurately into the desired beers.

Besides being a good brewer, what else does it take to be good at Gypsy brewing?

More than being a good brewer, you need to have a good working knowledge of science, and an ability to translate product concepts to a recipe design that makes sense. It requires good process managing, understanding the logistics behind both product development and production processing. You’ll need to liaise with suppliers, source ingredients, some of which may be rare or hard to find. In addition you need to talk to local manufacturers to understand how to make things wherever you are at the moment, build relationships based on mutual trust, so you get the best and more importantly when you require it. You’ll need to be able to work across internal and external stakeholders in a timely manner and sometimes under pressure. A good brewer will be able to correctly interpret the recipe design into a physical product – so whilst not being essential to being good at gypsy brewing, the production brewer will very much appreciate if you speak their language.

What are the most memorable places you’ve brewed at?

Definitely brewing in Tahsis, BC as well as putting down a batch in Pearl River, NY. Being exposed to unique ingredients such as foraged mushrooms in BC as well as NY state grown malt. The unique locations and challenges/opportunities it brings with it make it a very enjoyable thing to do. Each place is unique, and this can be repeated in as many locations as you can find.

See above. The ability to find locations and build partnerships often come with creating lasting relations. This uniquely human aspect of gypsy brewing will naturally result in collaborations, and it would be odd not to do this since you are partners already.

Who are the most successful Gypsy brewers in the world? Locally who else is doing this in New Zealand and Asia Pacific.

There’s notable early trendsetters like Evil Twin Brewing and Mikkeller of Copenhagen; and Stillwater Artisanal of Baltimore who built themselves into international brands through sales in bars, supermarkets and beer stores. They have all have been very successful and have now moved to their own facilities, some after up to 10 years of gypsy brewing. In NZ and Asia Pacific, there’s some examples like Behemoth and Yeastie Boys, as well the now defunct Cult Brewing.

What are the drawbacks of being a gypsy brewer?

I can name a few drawbacks from not owning your own stainless steel such as getting brewing dates bumped, not getting your carefully designed recipes translated into product correctly, getting misunderstood or poorly understood by the market – ‘wow, the quality and consistency of your beers is amazing, even though you’re a gypsy brewer’, and many others.

From a business perspective, what are the main advantages of being a gypsy brewer?

Here’s where the adaptability and flexibility of gypsy brewing plays in your favor: you can be at the forefront of trends by answering swiftly to even small changes since your loyal following expects precisely that from you, you don’t have a taproom that expects you to have lines with the same beers all the time, you can set up shop where you think you can sell your stuff rather than having to come up with strategies to sell stuff where everyone already knows you.

Is Gypsy brewing for everyone: why or why not? Will we see more gypsy brewers in the future?

We may possibly see more Gypsy Brewers in the future. Like the article mentioned above, there’s big responsibility that comes with being a gypsy brewer, and I don’t think most brewers as well as consumers actually appreciate that. You can quickly make a bad name for yourself as a brewer, because customers will expect transparency from you amongst other things. We make a point of always stating where we’ve made our beer, and are proud of our partnerships rather than trying to hide the fact we don’t own stainless steel. People will end up knowing your story, and if you’re not transparent from the get-go and good at what you do, things will eventually become hard for you.