The youth of Britain, Australia, Iceland are drinking less, and even the stalwart drinking Russians are laying off the tipple. New Zealand is bucking this trend, both the younger demographic and older demographic are prone to hazardous drinking.

Why is the global trend declining yet New Zealand falling behind? And what does this mean for your independent brewers?

In spite of the trend in New Zealand, we think the global trend is a good thing for independent brewers, here’s why:

For individuals, alcohol binging to the point of becoming a danger to yourself or others is not respecting the drink. No one needs a sermon on blackouts, hangovers and walks of shame – most are familiar with the harsh byproducts of excessive consumption.

Today it is surprising (and refreshing) to see that the binge drinking culture of Britain has drastically declined. In 2016, 35% of Britons considered themselves non-drinkers, up from 12% in 2001. Xenia Clegg Littler, a young actress from London, reflects on her disinterest in drinking alcohol:

“I’d rather wake up in the morning and get on with my day and achieve what I want to achieve than wake up with a massive hangover, I need to have control over where I am, and what I do.”

For Alcohol producers, respecting the drink means making the highest quality product possible. Inversely, it means not mass producing alcohol and selling it cheaply. The Americans, say what you will about them, are again setting the example. In order to sustain the quality and become sustainable, US beer can charge more, and consumers are just fine with this.  In contrast, their has been a dramatic increase in alcohol-free beer in the UK. This in part to both better health choices by millennials and a higher mark up for stronger beers.

In New Zealand, most alcohol has become cheaper since 2012. This is an odd turn around as reflected in New Zealand Beer Wikipedia page:

With a growth rate of 25% per year, Craft beer and microbreweries were blamed for a 15 million litre drop in alcohol sales overall in 2012, with Kiwis opting for higher-priced premium beers over cheaper brands.

Children’s novelist Spencer Johnson is quoted for “Integrity is telling myself the truth. And honesty is telling the truth to other people.” Is the New Zealand Brewer’s Association being transparent with consumers?

There is a Scandinavian proverb that seems apt here: “Urinating in your trousers will not keep you warm in winter“, meaning a temporary solution won’t fix a long term problem. In this case, the problem is declining sales of poorly made beer. Their solution? Make it cheaper! The good news is that we’ve become smarter consumers. The article Twilight of the Brands demonstrates a relevant example of this. Consumers eventually caught on to Lululemons cheap products and the founder’s flippant remarks nearly dive-bombed his brand:

But then customers started complaining about pilling fabrics, bleeding dyes, and, most memorably, yoga pants so thin that they effectively became transparent when you bent over.  Lululemon’s founder made things worse by suggesting that some women were too fat to wear the company’s clothes.

Foundations built on dishonesty, lies and deception are a poor legacy to leave behind.

Let’s face it – we love to drink! Sharing a drink celebrates passages in our life, and that is something ever brewer should endeavor to remember. We want our drinks to be part of those memories – whether its a wedding, a new job, your first child (or 3rd!). As craft brewers, its pure joy to create a product that can augment memorable moments in life.

We respect those who drink less or decide not drink at all. Regardless of your choice, it becomes our privilege to share our drinks with you.

In regards to enjoying your beverage – we created little meme generator with the help our friend Matej earlier in the year. We call it stories between the sips – as good beer is meant to be savoured, not skulled! We invite everyone to share their ‘meditations on a good pint’ here:

Our favourite so far by MusicalBeers: 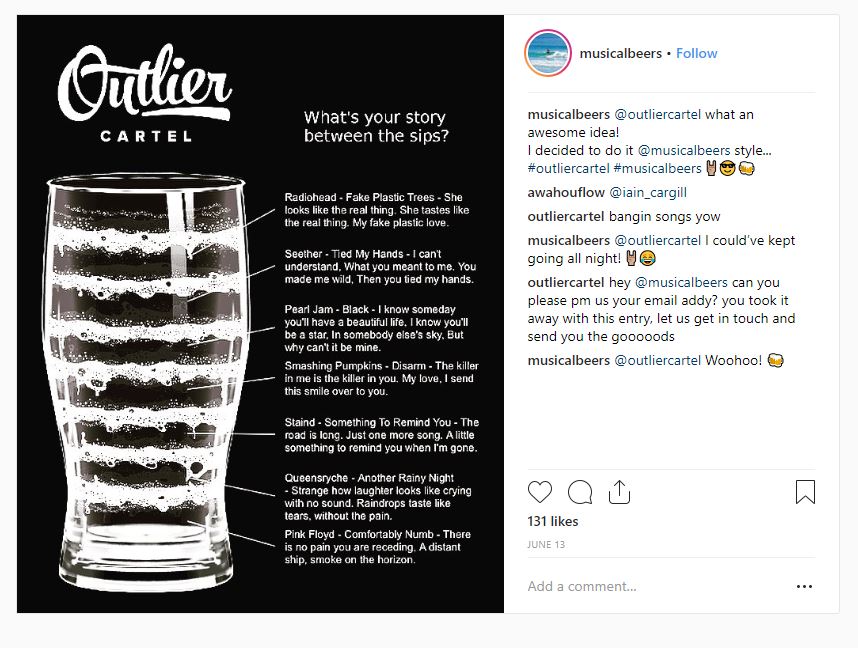 « Stories behind the sips
Thank you Auckland – Cloudburst is our city’s beer of the year! »